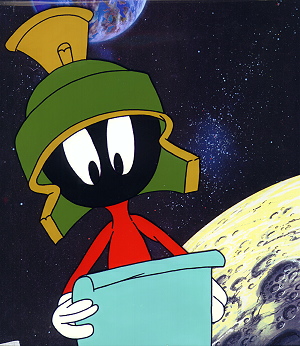 Gusev Crater (MPI) - A spokesthing for Mars Air Force denounced as false rumors that an alien space craft crashed in the desert, outside of Ares Vallis on Saturday. Appearing at a press conference today, General Rgrmrmy The Lesser stated that "the object was, in fact, a harmless high-altitude weather balloon, not an alien spacecraft".

The story broke late Saturday night when a major stationed at nearby Ares Vallis Air Force Base contacted the Gusev Crater Daily Record with a story about a strange, balloon-shaped object which allegedly came down in the nearby desert, "bouncing" several times before coming to a stop, and "deflating in a sudden explosion of alien gases." Minutes later, General Rgrmrmy The Lesser contacted the Daily Record telepathically to contradict the earlier report.

General Rgrmrmy The Lesser stated that hysterical stories of a detachable vehicle roaming across the Martian desert were blatant fiction, provoked by incidences involving swamp gas. But the general public has been slow to accept the Air Force's explanation of recent events, preferring to speculate on the "other-worldly" nature of the crash debris. Conspiracy theorists have condemned Rgrmrmy's statements as evidence of "an obvious government cover-up," pointing out that Mars has no swamps. They point to the release of secret government memos detailing attempts to discredit reports of the landings by alien space craft. The memos discuss strategies to avoid troubles similar to those caused by the War of the Worlds radio program of years ago. The program, which featured a sensational story of gigantic oxygen breathing two-eyed invaders from Earth, sparked planet wide panic.

Local residents like Driv Rhodo, who lives in the area of the alleged landings, are even more skeptical. "I seen it with my own 5 eyes" claimed Rhodo last week. "I've lived here over 300 years, most of my adult life-form. Them things used to be few and far between but lately they come in every few years or so. The government wants to bury the truth but I can tell you what's real. The Earthlings are going to invade and the government is spending our hard earned tax dollars on press releases and denials instead of preparing for the battle to come." A spokesthing denied any government involvement in the disappearance of Rhodo, who has not been seen since shortly after the interview, claiming "Any sentient being knows that a planet with the concentrations of water and oxygen found on Earth is a deadly and inhospitable environment for the formation of life, much less intelligent life. The fear and consternation caused by the unfounded and wild speculations of citizens like Rhodo are a traitorous disservice to the citizens of Mars."


Looks like it's getting increasingly impossible to disregard the possibility that the world is going to be a pretty radically different place in a matter of decades, even years. One recent eye-opening article is about robot scientists successfully formulating theories and carrying out experiments to prove them. More accurately than humans. If you thought science was advancing fast before, imagine what happens when these kind of robots become wide-spread.
If you're too anxious to wait for that to happen, you can also participate in scientific research. Now, in addition to helping out with the SETI program by giving them your spare computer capacity, you can also help out in the research on protein folding. Doesn't sound exciting? Well, the implications of the research range from making better tasting ice cream to curing cancer. I'm not actually sure about the ice cream part, but given the potential I'm pretty sure about it. So, if you're into ice cream but aren't too interested in little green men, there's finally something for you to let your computer work on while you're not. Or even while you are.
And if you're all queasy about all these scientific advances, you're not alone.

As of today, I've officially joined the productive part of the population and started full-time work. That might come at the expense of less-productive tasks such as updating Kekkuli, but I would presume not. Nevertheless, you have been warned. Still, there is a possibility we will get a lot more readers in the coming weeks, as Tero's media celebrity status increases. Don't worry, you don't have to understand what I'm talking about.


For people outside of the US, Saturday Night Live usually doesn't mean much. It's rarely shown anywhere else (probably because the jokes are pretty US-centric) and even me, who's a lot more familiar with US culture than most non-Americans, haven't seen more than a few ten episodes. Nowadays they show SNL on a small cable-channel, but I haven't understood yet what the logic of the sequence is: sometimes the episodes are 5 years old, sometimes 25.
From my limited experience, I have to say that the best thing to have come out of the show is Jack Handey's Deep thoughts (a taste of which can be read here, for example). They have a much higher hit rate than your average SNL sketch. Another recurring joke that I also find entertaining is Celebrity Jeopardy, which apparently is such a popular search string that most of the results in Google are porn sites that have just added the words somewhere on their site. Never fear: as should be expected, there's a site for all your SNL needs: The SNL Archives. Whatever it was that you were wondering about the show, you're pretty sure to find here. Like all the appearances of Celebrity Jeopardy. For actual clips of the sketch, you're probably best off looking for them on peer-to-peer networks, that's how I found mine.


As you may have deduced, I consider myself a person who tries to keep up with space-related news more than the average Joe. So I have to say it was a big surprise to me when I realized that the European Space Agency has a plan called Aurora, partially accepted by governments already, to send people to Mars by 2030. How did I miss that? The reason I heard about it now is that apparently today Bush is going to make a speech asking for a lot of money for NASA to do the same thing. At first, I was enthusiastic about the idea that Bush would finally propose something that I could agree on with him. Then I heard his pop suggested something about as grandiose in 1989, well in time for the elections without accomplishing much in the area in the end. Dubya certainly has a reputation of carrying out with things he sets out to do (unfortunately most of these things are rather stupid), so this could be more serious than his dad's effort. Moreover, Bush Jr. seems to be bent on bankrupting the US state. Think about it: if you want to throw a lot of money out of the window without getting any financial benefits in return, what better ways than to wage war, increase defense spending and send people to Mars? I hate to put those things in the same category, since space exploration isn't really a waste of money in my opinion, but economically it sure is.
Anyway, the fact that there already is a European program once again raises my hopes. What better way of getting people to Mars than a good old space race? Throw in the Chinese and we could well see some exciting space-related action in the coming decades. I'm very much looking forward to that.


We people tend to get a kick out of doing things out of the ordinary. But what really tickles a nerve is when you realize you've done something that nobody else can ever do again. One obvious example that pops right into mind is that if you managed visit the WTC in New York during what turned out to be its rather brief existence, you're part of a select group of tens of millions of people that have done so. Still, that group can no longer grow, so the older you live, the more special you can feel as the other tourists start dying off. If you live until 2120, you may well become the last person that has ever visited the original WTC (the building complex in its place now known as George W. Bush Freedom Plaza). Another less mainstream example would have been the ancient citadel in Bam, which was destroyed in the recent earthquake. For those of you that managed to see it: good for you. Naturally, that castle and the big buddhas in Afghanistan that the Taleban destroyed share the peculiar character that hardly anyone knew about them before they were gone. Sort of like those famous painters that die poor and forgotten.

The one now forever-lost experience that I managed to collect into my "been there, done that" -book of life was to drive on Route 666 in Southwest USA. Now they've gone and renamed the route. Oh well, I guess you can still drive on the road, only it's not as cool-in-an-adolescent-way to say that you've driven on route 491.

The story is on Ananova, which doesn't really have a good reputation in all circles as a news source. This time, check out the "related stories" to this piece on a renamed route: "Man cuts his penis off with machete" and "Seven-stone woman takes on 29-stone man in eating contest". Time to check up on the meaning of "related", wouldn't you say?

I don't know if you've heard, but starting Jan 1, 2004 in most states you will no longer be able to use a cell phone while driving unless you have a "hands free" adapter. I went to Circuit City and they wanted $50 for a headset with a boom microphone for my cell phone. I have come up with an alternative, working through Office Depot. These kits are compatible with any mobile phone and one size fits all.
I paid $0.08 each because I bought in quantity.

I tried them out on Ericsson, Motorola, Nextel & Nokia Sprint PCS phones and they worked perfectly. A photo is attached. Take a look and let me know if you want one.