In these times of limited storage and bandwidth capacity on the internet, a website owner is often compelled to shift the burden on someone else by linking to a file or image on someone else's server, rather than copying the file to his own. Most of the time this is fine, as major sites like BBC or the White House probably won't even notice some puny site's link to a file on their servers.
When linking to other small sites, there is a danger. The danger is that the guy you're linking the file from changes a different file for the one you've linked to. And the results can be somewhat awful. If you're linking a picture, your whole site can get a new look. Which is what happened to the post at the beginning of February here at Kekkuli. For awhile, there had been a new picture that didn't make much sense in terms of the text next to it, but some time ago (a day? A week?) the picture was changed to one of the worst that keep coming up now and then around the internet. For the sanity of us all, I've now deleted the entire image link. If you missed the new image, don't worry, you're a better person for it.

So the Oscar-gala was yesterday. Actually, thanks to time zones it was today over here in Finland, and the reason I'm mentioning it is that I stayed up all night watching the show. And after about four hours of sleep, I have to say I enjoyed the event. Part of it probably had to do with the little drinking game we invented with my friends (a shot of Genghis Khan vodka for every right guess), but even after everyone else quit around five in the morning, I still had a good time watching the rest of it by myself (no, I didn't take any shots anymore, I'm not an alcoholic). Steve Martin was pretty funny as a host, and an extra layer of interest was created by the war in Iraq. Who would say something? Mostly it was rather civil, but when Michael Moore called Bush a "fictious president" and the conflict in iraq a "fictious war", there was quite a lot of booing. And later Martin mentioned Moore was being stuffed into the trunk of a limo...
Overall, wasting a night and a day (it's not like I'm going to be to productive today) for watching the gala was a good idea. It actually seems more like an event when you have to stay up all night to watch it rather than watching it as any regular Sunday-evening program in the US. Speaking of which, I saw the final episode of the first season of "24" yesterday as well and let me tell you, it was refreshing to see a mainstream American tv-show that didn't have a completely happy ending.


If you see this, it means we're on the new server. Rejoice!


These are exciting times we're living in. Forget about all those world crises and international clashes, this is about Kekkuli. This week, we'll be moving to a new hosting provider, which unfortunately means there might be a slight downtime for the site and the email service. Hopefully, no one notices. Once we're done with that, I'm working on getting a whole new look for Kekkuli using a program called Movable Type, which seems to be the leading software for simple blog-type web sites like ours. With it, the use of archives should become easier, as well as commenting on individual texts. No promises as for now, but hopefully I'll get around to doing the changes in the next coming weeks. Don't hold your breath, but do check back once and again.


If you're very familiar with Seinfeld, you'll know that Tolstoi originally considered naming his book "War and Peace" "War, What Is it Good For" instead, but his lover convinced him otherwise...

I have to keep giving credit to our US correspondent Petri, who's take on his year as an exchange-student in Knoxville, Tennessee keeps cracking me up. Without him, I would probably never (and by extension, neither would you) have found this amusing take on the war in Iraq. As we all so acutely know, the mentioning of Nazis always makes an argument more... vivid. And I really should keep up with reading The Onion, which continues to be the best source of satire on the net as far as I'm concerned. In fact, "funny, but it's not The Onion" is a valid comment to post on any internet discussion thread (but not after someone's mentioned the Nazis or Hitler). Luckily, once again our foreign correspondent (he doesn't know he's one, though) saves the day.


Many people don't know how to drink. Well, now the time for lame excuses is over, for here are the rules of boozing for all you to read and learn. Once ready, please sing along to praise the golden nectar of gods beer, before chucking it down. And when you have had enough to drink, maybe then you will find even this clip funny... But don't drink too much or you might end up missing like some weirdos apparently...

Basicly what I am doing here today, if you hadn't noticed it already, is getting rid of many very stupid links I have had for some time now, and want to delete them for good. But of course not before sharing them with you! So, let's carry on. Check out this moronic mind-reader, and this crazy monkey. And finally, make a picture of yourself in French! Bon chance and bon weekend to all!


Some of you may have stopped looking at those news items on the right, especially if you're not that interested in space events. Others, on the other hand, can't seem to get enough space-related stuff and information, so here's a posting dedicated to the several (three to be exact) recommended space-sites I've received in the last few weeks.

Looking for a gift for a space-geek? Look no further than collectSPACE, where you can buy pretty much anything space related. For those of you with more money than is healthy, you can always get yourself a tailor-made space suit for only $12,500. No more tin foil wrapped around your head, get the real thing.

If you're wondering whether you've missed out on some crucial information relating to the Columbia disaster, you can compare your notes with USA Today's interactive site that has pretty much everything known about the accident collected into one tidy and neat-looking wrapping. Watch those sensors on the left wing overheat one by one. Gruelling stuff.

And if you're still not getting enough space-info, check out John's space blog, where he comments more often on space-issues than we here at Kekkuli, where we like to stay aloof and not focus on any one particular issue for too long lest it confine our artistic freedom for writing anything that comes to our heads. "Intellectual pornography" I think someone labeled it some time ago.


Einstein got it only partially right: everything's relative, but it's all also related. Just look at the causes given to the impeding war in Iraq. If you started drawing a mind map of the key players in this whole drama, the number of links would just keep on increasing. Chirac was a buddy of Saddam's in the 1980's, as was Rumsfeld. And that's just recent history, go back a few decades and the connections just get more interesting. How long has France had particular interests in the region currently known as Iraq? For a lot longer than the US.
This all acts as a poor introduction to the real piece of writing I wanted to share with you today. It shows the relation between the Romans and the shuttle. Take a look.

And now a public service to our Finnish readers (and a show-off to our non-Finnish readers on how technology is used in Finland). The parliamentary elections are on, with the official voting day on March 16th. Don't have a clue who to vote for? Never fear, there are at least three sites where you can answer some policy questions, and the site will tell you which candidate's views are closest to yours. Compare the results from all three "election machines", and you're bound to find at least one person with very similar views to yours. I did, and was actually positively surprised. The sites are:
Helsingin Sanomat
Yle
MTV3

Vote, it's good for you. 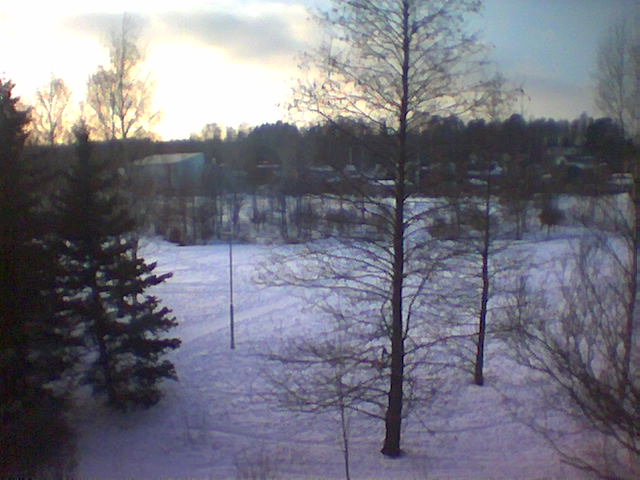 This, my friends, is a photograph taken with my brand new mobile phone. The fact that the picture is so boring does not bode well for telecommunications companies, who hope that "multimedia messaging" (MMS) will save them from their current troubles. For some reason (I really don't understand why they're so popular. People: it's easier and cheaper to just call) SMS messages surprised everyone by becoming a huge hit, so now the same thing's expected of MMS before the whole 3G thing comes in to give telecoms even more money. There's just one glitch: how often do you think you're in a situation that's so important/funny that you just have to take a picture of it and send it to all your best friends? I'm guessing not too often. The only reason why I've bombarded family and friends with pictures taken with my phone is that 1) I have a new phone I want to show off to everyone 2) MMS messages are free during March with my mobile service provider. The moment every message starts costing 59 cents I'm giving up sending pictures of the view from our bedroom window to anyone.

The phone is still pretty cool, though. It looks really crappy, and the numbers are positioned differently than on all the other phones (yet more reason not to send any SMSs), but there's so much I could do with it if I really wanted to. It has 20 megabytes of memory to start with, which means that Wing Commander II, which was the biggest computer game in about 1992 could fit into my phone. I can watch videoclips with it (not too enjoyable, let me tell you), download and play all kinds of games, I guess there's some way to actually call with the thing as well. One thing's certain, though: I would have never paid a dime for it. That, the fact that I'm not going to be sending any MMSs once they cost something, and the fact that 3G is still a long way off, make it my personal bet that several more telecom companies will be going bust in the coming months/years. Of course, all those other people sending SMSs will probably send equally idiotic MMSs in the same quantities, keeping companies floating and the economy running. Is there any economic theory that explains growth through idiocy?