bellicosity or mouthing or abatements or cardinality or articul (Ok, you lost me. Sounds perverse in any case.)

denotative or alabamian or mentioning or bulling or antinomy (Is that you again? Stop using non-related words in the same search!)

dives or autodecremented or stressed or jugs or deceived (Fine, I give up. Knock yourself out.)

finnish hockey team nude (Now that's plain revolting. Although Raipe does have that something...)

flank or keypad or bad or desist or anniversary (Jack? (I had to give a name to this guy by now.))

guy or condemned or debutante or preferences or scowling (What's Jack looking for this time? Any guesses?)

The best part about these: we're never going to run out of them! They'll just keep pouring in and in and in...

Now that the holidays are approaching once again, and families get closer sometimes, it is better to take care of yourself if you ever want to make it through till that magical Christmas night when somebody you love, or at least loved till then, gives you a pair of ugly socks or something else you did not expect nor want. So, to make sure nothing bad happens to you (and that you live long enough to revenge the socks), don’t play golf of course or even off course, but also avoid smoking cannabis, but even if you do, don’t go paranoid and use Botox to make yourself prettier, but if you do anyway, at least don’t take part in any beauty contest, but even if you would, don’t fly Air France to get there, and especially make sure you don’t fly via Lagos Airport. Following these simple instructions, you have a better chance of making it till the next year at least.

So, just stay home and kill time with some great games, such as this fun ballgame. I know it’s in Japanese, but I’m sure you can figure out how it works. If you can’t, what are you doing outside of the nuthouse anyway! My first level record is 28 seconds left. Beat that! My other all-time favourite is of course Pac Man. You can also spend your time spotting the hoax photos in this fun test. Good luck with the giant bear!


Playwright Jim Sherman wrote this today after Hu Jintao was named chief of the Communist Party in China.

HU'S ON FIRST
By James Sherman

Since I'd received that little play from several sources in the last 24 hours, chances are you might have received it already as well. But it's still funny as hell. Now somebody find me the original "Who's on first?" sketch.


In a tradition long-forgotten, I've sometimes put up some brainteasers on Sundays to give you something to do on the quietest day of the week. In the same tradition, Fark.com has been kind enough to link to those puzzles. So now I'm giving you a new one, and hoping it will bring another 30,000 visits to our site like the previous ones did.
This test is yet again an "official" Mensa one, although it won't tell your IQ. Just to help you avoid some frustrations I had, you should know beforehand that the test has obviously been composed in South Africa, which has a bearing on a few of the questions. Enjoy. Oh, and also, the grammar and spelling isn't always Mensa-level, so watch out for that.


For those of you that think you're of no use to your community, take note: move to Sweden, and you can at least help out after your death. A short translation of an article in Swedish:

Fortum wants to connect the Rĺcksta crematorium in northern Stockholm to the district heating system. Neither the church administration (kyrkosamfundet) nor Fortum believes that this project will result in any profit.

- We are doing this to save energy and to improve our environmental managment, say Börje Olsson of the church administration in Stockholm. The connection will be made in March 2003.

How about that? Gives a whole new meaning to getting "a warm feeling" from your loved ones... Could you imagine this happening in a catholic country? What do you think about it? Make your voice heard at the Kekkuli Forum.


So it turned out to be a quiet week on Kekkuli last week. For a change, some of you maybe already got used to getting updates every two or three days. Despite that, we reached another magical level in the counter at the bottom there, when Tero (after several refreshes, no doubt) became the 4444th hit to this page this year. So we'll probably break that 5000 mark still this year. In other words, there are hundreds and possibly thousands of people out there that have read something on this page. That's cool, keeping coming.
We also recently had a quick rush of activity over at the poll (now changed to something meaningful?), like we had in the forum much, much earlier. Now both of them are their own dead selves again, but you're all free to try to reinvigorate them. Otherwise you'll be eternally doomed to just reading Tero's and my ramblings.

So what's with that title for today? I read about this Nokia Game already last year, and it intrigued me somewhat. When I heard that a new game was starting this year, I thought I'd try it out. I would have recommended you to join as well, but Nokia had a limit of 1,000,000 players, which was reached last week. So if it turns out to be great fun, you'll only be able to hear about it from me. We'll see, it's starting today, I'll keep you posted on what happens in the next few weeks, if they're able to pick my interest for that long. And as long as it stays free, I'm not paying a cent for playing it. 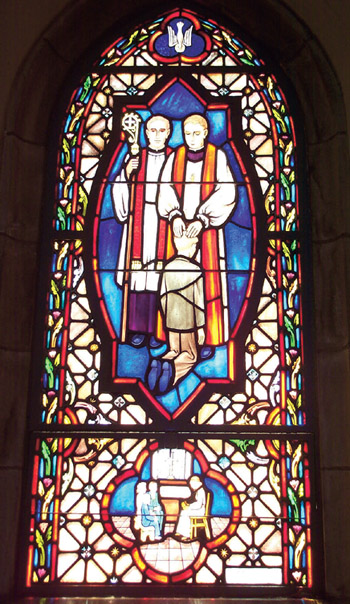 As you'll probably agree after seeing that church window on the right, unintentional humor is often the best kind of humor (although in this particular case I can't swear this image isn't just a well-made photoshop). As is always the case, human stupidity is not to be underestimated, and is often worth a good laugh. Of course, not all unintentional humor is the result of stupidity. Like that window, which although suspect already before, only turned funny a year or so ago with the scandals. Another example of this is a classic Snapple juice flavor called "Bali Blast" (find it under retired flavors at Snapple.com. Speaking of that bomb attack, the third kind of unintentional humor is that of poor timing, as this ad beneath an online news article about the Bali bomb demonstrates.
But we shouldn't forget about stupidity either, and those silly foreigners who can't use English as well as all those Americans.