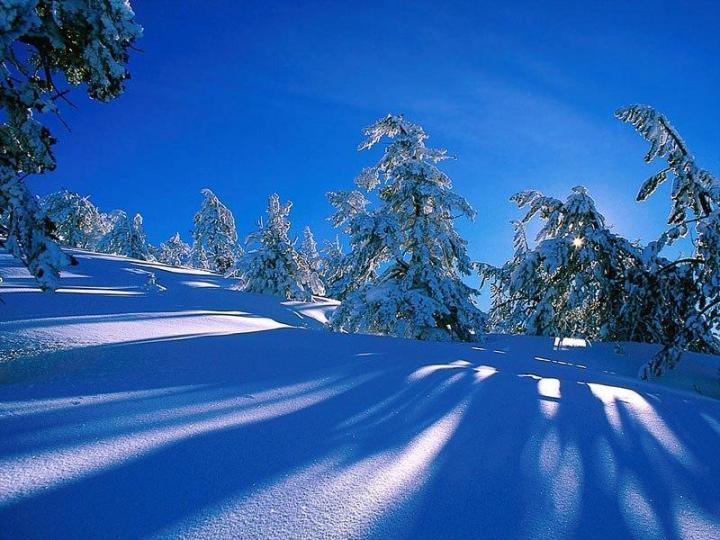 These times can be stressful, so are you feeling stressed? Do this.

Picture yourself near a stream.
Birds are softly chirping in the crisp, cool mountain air.
Nothing can bother you here.
No one knows this secret place.
You are in total seclusion from that place called ‘the world’.
The smoothing sound of a gentle waterfall fills the air with a cascade of serenity.
The water is clear.
You can easily make out the face of the person whose head you're holding under the water.

It is once again that time of the year when we wish you all as well as ourselves the merriest of holidays! May this Christmas be the one where finally your greatest wishes come true, may we all get what we have dreamed of, be it world peace or hope and understanding for all mankind. Personally, I wish for a Scalextric!

Let our season be full of joy and white snow, like here in Helsinki , and hopefully less full of full of white trash, like in Buttfuck, Ohio, or somewhere like that. Sorry Ohio. Anyway, here is an educational story, or rather two versions of the same story that fit right into these times. May its message be heard in all lands, near and far. Preferably far.

CLASSIC VERSION:
The ant works hard in the withering heat all summer long, building his house and laying up supplies for the winter. The grasshopper thinks he's a fool, and laughs and dances and plays the summer away. Come winter, the ant is warm and well fed. The grasshopper has no food or shelter, so he dies out in the cold. The End.

MODERN VERSION:
The ant works hard in the withering heat all summer long, building his house and laying up supplies for the winter. The grasshopper thinks he's a fool, and laughs and dances and plays the summer away. Come winter, the shivering grasshopper calls a press conference and demands to know why the ant should be allowed to be warm and well fed while others less fortunate are cold and starving. National News shows up to provide pictures of the shivering grasshopper next to a video of the ant in his comfortable home with a table filled with food. The nation is stunned by the sharp contrast. How can this be, that in a country of such wealth, this poor grasshopper is allowed to suffer so? The opposition parties stage a demonstration in front of the ant's house, where the news stations film the group singing, "We Shall Overcome." A local member of government rants in an interview with celebrity news reporter that the ant has gotten rich off the backs of grasshoppers, and calls for an immediate tax hike on the ant to make him pay his "fair share". Finally, the Government drafts the Economic Equity and Anti Grasshopper Act, retroactive to the beginning of the summer. The ant is fined for failing to hire green bugs for help and, having nothing left to pay his retroactive taxes, his home is confiscated by the government. The story ends as we see the grasshopper finishing up the last bits of the ant's food while the government house he is in, which just happens to be the ant's old house, crumbles around him because he doesn't maintain it. The ant has disappeared in the snow. The grasshopper is found dead in a drug related incident and the house, now abandoned, is taken over by a gang of spiders who terrorize the once peaceful neighbourhood. The End.


Not that I have anything to say (which hasn't stopped me before either), just wanted to wish all Kekkuli readers expensive Christmas presents and awesome new year's fireworks. But we shouldn't forget in who's honor Christmas is really celebrated, even if in reality he did look like this.

Had Jesus been a cyborg, he would've been a Journeying Entity Skilled in Ultimate Sabotage. S.A.N.T.A. is a Synthetic Artificial Nocturnal Troubleshooting Android, while J.A.N.I. is a Journeying Android Normally for Infiltration. What's your cyborg acronym? 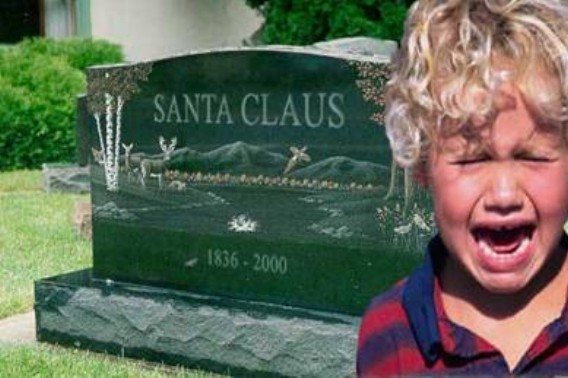 Well I guess the picture says it all, so in case you are strapped of cash and have little brats demanding loads of booty this christmas, now you know what you can do to cut down on your family expenses. I predict a merry merry christmas coming up!

And now that you don't have to go shopping for Santa anymore (who I think will have to soon move from Finland further north, if these reports are anything to go by!), why not try some other ways of getting into the holiday spirit? You can start by telling your kids that Santa's spirit is still around, at least in these quite amuzing games. So, go ahead and try keeping Santa on the roof, and if possible, sober. Or, see how well Santa does ski-jumping. For all you golf addicts out there, this seasonal mini-golf is a great way to keep busy in the office. And speaking of office, did anybody wonder why Turkey wasn't accepted into the EU straight away? Maybe things like this is one reason.


So let's face it. Despite what I wrote last time, it is the US that is making its presence felt in the world, whether through language or through what we eat. And as has been the case throughout history, many people will resent a hegemonic power. Why? Because. These resenters can then be easily stereotypified.
A friend of mine has followed up on point number three on that last page, and has decided to see for himself what all the fuss is about. He has studied there for four months now, and writes about it very well on his homepage. So whether you're a non-American wondering what it would be like to live in Knoxville, Tennessee, or an American wondering how a foreigner views living in Knoxville, Tennessee, I suggest you check out his "project".


With Harry Potter, James Bond and J.R.R. Tolkien, you have to start wondering what this talk about American cultural imperialism is all about. Granted, those movies were made with American dollars and have more than a few American characteristics, but there are few things less British than the boarding school or James Bond. What comes to the Lord of the Rings, everyone is of course acutely aware that it is exporting Finnish culture rather than British, as Tolkien's great source of inspiration was the Finnish national saga Kalevala. If you didn't know about it before, you can learn a lot more about it from National Geographic. Hell, you might as well buy the video.
Naturally, none of this is nothing more than a puff for you to get some posters and us some dinero:

As a special bonus, this poster should tickle the fancy of a few hardcore-fans out there:

Dave was kind enough to upload the original Abbott & Costello "Who's on first?" bit after I asked for it, so if you're not familiar with it, I highly recommend checking it out. Thanks Dave! 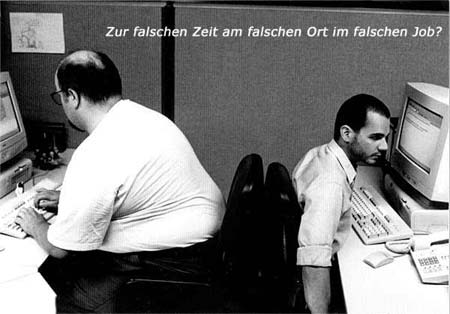 The picture here shows how I was feeling at my new job (you can try to guess which character I felt more like...), so after sitting at the office for an hour today, I said thank you very much and walked out. Life is indeed too short to be spent in a boring dead-end job where your boss complains if you get back from your lunch break 4 minutes later than supposed to. Anyway, I sang all the way home, so I guess I'm not that depressed. Life goes on.

Life doesn't go on everywhere though, unfortunately. After reading more about this recent incident in Israel, I just feel more and more assured that this world indeed is one crazy place. I mean, the United Nations is raising a big issue about the now dead British UN worker who was shot by Israeli military last week (who are now finding who-knows-what new evidence to prove them right). All in all shooting innocent bystanders I agree is a crime, and I know this kind of thing "happens", but again we come to the same thing we talked about before, if we look at the bigger picture. So, why is this UN worker so much more important than for example the 16-year old school boy the same military shot on saturday? An incident which by the way has received very little media attention. Why isn't the UN raising a big hello about that? Would it have something to do with the fact that the boy is Palestinian? I would hate to think so. It just seems that there is so much politics involved in everything, that we humans seem to have somewhere lost sight of the things that should be important, things that make us humans to begin with. I hope next year will be a year of more peace, so good luck for the weapons inspectors in Iraq. Seek and destroy, otherwise our buddy GWB will.