By the time you read this, I'm on my way to the US. Right now (provided Tero posted this when I asked) I'm in Iceland, exploring the city of Reykjavik, and in a few days I'll be in New York. For the next six weeks, I'm trying to be all over the place with my girlfriend and my friend Petri, who you might remember from his commentaries on his year abroad in Bushland. What this all means of course is that during this time, you're on the mercy of Tero providing you with your dosage of Kekkulisque material. However, I will try to get a word in now and then. As our readership consists of quite a few Americans, I'm going to ask you for some assistance on how we should plan our route. We're borrowing a car to drive from DC around for three weeks and back to DC. Our current ambitious plan is to make it all the way to Las Vegas. This roadtrip segment of our travels begins on May 9th, before which I'll make sure to try to get online to post a poll to give you a chance to direct us in the best perceived direction. If you're bursting with good suggestions before that, feel free to email me with your "you have to see ..." messages. Hell, you might as well invite us over (as quite a few of you out there have already done, thanks), although I can't guarantee we'll make it everywhere. In any case, I'm sure you can find joy in your meaningless job/studies/existence from the fact that I'm on vacation!

Oh, and as you can imagine, this means those changes I promised over a month ago will keep on postponing themselves. How did I know that? But they will happen, oh yes, they will happen.


So it's that time of year, which no one else besides people living above a certain latitude care about: the ice hockey world championships. For as long as Kekkuli has existed, there has been a poll on who you think is going to win, and this year is no exception (even though we have to give up on those answer options that seemed to fit in with any question. Of course, we could've asked "Ice hockey world championships..."). But give in your answers in a hurry, because I'm going to change the poll question already in a few days, with a much more important one. More on that later. Meanwhile, you can get into the spirit of the games on the official site, which does an excellent job of reporting on the games. At least it did last year. If you don't care about ice hockey, don't read this post. What did I just tell you?

Not that you would notice, but the archives are back on the same server as this main page, meaning that you don't get that "the archives have moved..." text anymore. This is step 1 of the Remodeling Kekkuli Project (remember? That thing I promised about a month ago in "just a few weeks"). I say not that you would notice, since I just realized that for the last couple of months the archives have had a wrong start page. And no one cared! I feel so rejected... Our stuff must be so good that people want to relive them again and again, musn't it? *sniff*


The good news is that the main invasive part of the war in Iraq might be over, which in turn could mean more stability and a shift towards rebuilding and eventual normality in the country and hopefully in the whole world for that matter. Well, no matter what the history behind this war is, or which speeches led to it, somebody seems to know where the future of Iraq lies...
Well, whatever might be the real truth about many things, some things we do know something about. First of all, according to his speeches, Bush Jr. seems to want to rid the world of all evil, so that fine outstanding (literally in this case...) American youth can live in peace (and in total neglect one hopes!). Secondly, the Iraqis are looting what they can, but still so they look like amateurs. The Russians, or more so the former Soviets, were masters of taking all they could get their hands on, and perhaps it is exactly that what the US-spotted Russian envoys in Iraq are doing. Luckily they too are now mostly grasping the threads of democracy, which by far is the most functional form of system we humans have come up with till now. What lies for us and US in the future, only those who live to see it can tell, but in the meantime, as I believe the key to world peace is communication, here is something to improve understanding among us all. If everybody on this planet of ours would just take some time to stare at the stars or study the local surroundings, or learn from great poems such as this one, (which I think is really by Borges no matter what they say) maybe then we would notice that things aren't that serious after all and perhaps eventually learn to just get along. 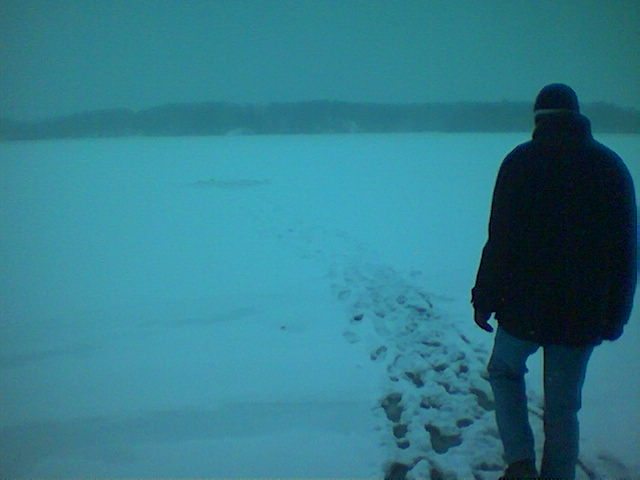 The picture is from about one week ago, showing the enjoyable spring weather we enjoy here in Finland. In reality, it's gotten better by now, with the temperature actually above freezing point most of the time. Yes, the picture is taken with my phone, but as I transferred it to a friend's laptop with an infrared connection I didn't pay anything for the picture. So the telcos are still doing pretty bad as far as I'm concerned. And even the war in Iraq won't save them, according to our highly scientific poll on the left. Don't you all think those options fit in pretty well? I'll have to keep coming up with questions that fit, until that becomes old.
Meanwhile, if you're getting bored with Fox propaganda, go read this guy's lonely crusade against mass misinformation. It's pretty interesting, makes you think once again what's true and what's not. I'll tell you one thing that's true: the Iraqi information minister is so popular, his fan website keeps going down. If you happen to get through, you'll be able to read some of his best quotes, like:
"Our initial assessment is that they will all die"
"I speak better English than this villain Bush"
"they are nowhere near the airport ..they are lost in the desert...they can not read a compass...they are retarded."

If you don't know what or whom to trust, make sure you get your facts from Mohammed Saeed al-Sahaf (currently on administrative leave).


That random quote at the top of the page has been there for quite some time, so if you've visited often, chances are you've read most of them by now. Originally, I had thought I'd keep adding new quotes at a rapid pace, but more often than not, I'd forget about a good quote before I managed to add it to the list. Many of you probably haven't realized that you're allowed to submit quotes as well, by clicking on the "Random Quote" text, which is also a link. So if you have any good ones on your mind, send them our way.
Slightly related, I recently came across something I really liked a lot. Dharma & Greg is an ok, pretty regular sitcom that I find myself watching reruns of once in awhile. At the end of some episodes, there's a screenful of text for a second or less, which I've always thought was just a legal disclaimer of some sort. As it turns out, they're actually "vanity cards" written by the producer of the show, Chuck Lorre. The first ones start with: "Thank you for videotaping "Dharma & Greg" and freeze framing on my vanity card." Lorre writes pretty much about anything on these, and it strikes me as hilarious that a producer would spend any amount of time creating something that probably most people watching the show will never catch. That is, if there wasn't internet. Obviously, someone's gone and collected them all so that the rest of us don't have to freeze-frame videotapes of the show. This is just one of the sites that has all the vanity cards and they're a fun read. Especially when you catch the reference. And this one just had to go into my quotes list right away.


There has been a lot of criticism lately, and I guess pretty much always too, about the poor level of hospital treatment in Finland. Now, first of all, the hospitals in Finland are probably among the very best in the whole world, so complainers should live in Burundi or somewhere for a while before complaining next time. So, for those who feel that Finnish hospitals suck, here is the truth. They don't. I just checked out yesterday after having some surgery on my sports-are-good-for-you-till-they-do-damage ankle, and now I'm limping away happily at home and unable to do much else than things like this. I am greatly missing the warm hospitality (see! that's where the word comes from too!!) of the hospital, where smily nurses brought me constantly great tasting food, which I had even chosen beforehand to suit my tastes! (I guess the hospitals in Korea serve this stuff pretty much all the time...), then snacks in between and otherwise helped me to go to the bathroom or walk around when I felt like it. I mean, the service was MUCH better than in any 5-star hotel I have stayed in, and I have stayed, even worked, in a few believe me. Ah, and what was the best part? This whole 2 day adventure with all amenities included (they gave me bandages and free drugs when I left!!) cost me about 22 euros. Office charges they told me. Wow. Now there is a place to stay next time in Helsinki!! Mark my word. One downside could be that the cue to get in is about 5 months long. Nothing is ever perfect, damn it. Well, limping or not, I'm off the a one-day-long cruise to sink my memories in booze and the Ostrobotnian waves. Good health to you all!


Kekkuli will probably remind me forever of April Fool's day. Only two years ago, I had no clue what day it was when I received that email... It's funny how the memory works: from now until I die, April Fool's will always be connected in my mind with Matti Nykänen.