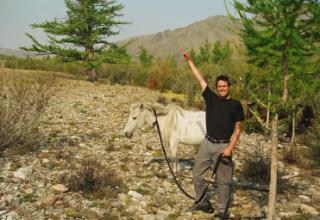 This is the story of Trond and Jon’s trip on the Mongolian steppe. The plan was to buy horses and ride to Khöhöö (which is pronounced like a double cough, in case you're wondering) via Lake Khövsgöl 100 km to the north of Mörön. They did buy horses. They didn’t make it to Khöhöö.

After 22 bumpy hours from Ulan Bataar, we finally climbed out of the "bus" in Mörön. We met an English-speaking man, who invited us to his parents’ horse farm at a ger 20 km outside of town, to see if we were interested in their horses. We definitely were, as he offered three horses with saddles for 270 000 tögrögs ($250), about half of what we had prepared for.

Once the deal was settled, we were given some short lessons on horsemanship and spent the night in the ger. In the morning, a lamb was slaughtered and we were offered some boiled guts before our departure. As we didn’t have any maps of the area, we were given a description of the route: Follow the ‘road’ to the next valley for 18 km, then follow the river to the lake. Simple, can’t miss it.

After 30 minutes worth of riding, the packhorse’s (soon to be known as Ralph) saddle fell off. While Jon was attempting to fix it, Jon’s horse took advantage of the situation and ran away. After an hour and a half, a local happened to ride by (as we soon realized they tend to do out there in the middle of nowhere) and caught Knut Erik (named after the vocalist in the Norwegian rock group Return. Their hair is about the same length), only to ride away with Jon’s pocketknife.

We didn’t find a river on that day, only a very dry stream. Next day we continued searching and ended up on top of a hill for a view. There wasn’t a single river in sight. On the way down, we came through a thick forested patch, where Trond’s backpack got ripped open.

While Trond was sewing it, Ralph tied himself into a knot with his rope and invented a broken bone, refusing to move. Finally continuing downhill, Trond’s horse Ulrik, which seemed to like stumbling, stumbled with both front hooves at the same time, throwing Trond off the horse. For the first time.

Once we managed to get down to the dry valley, Jon - because of his thirst presumably - crashed into a tree branch, leaving him dangling on the branch holding two horses that were quite eager to continue. Somewhat further on, Trond finally spotted the river. Overwhelmed with relief, we started to trot towards the beautiful spot, when Ralph suddenly decided to stop for a leak. Jon was pulled off his saddle, leaving him hanging between a busy Ralph and an angry Knut Erik. Not for the last time.

During the night, Knut Erik had managed to remove his head lace. With the help of old rock songs, coffee and numerous attempted traps and lassos, we finally got it back on him and continued on our way. Only to get lost in a very dense forest along the river. We left Ralph behind and rode ahead to check out the situation further away. As we got back having learned little, Ralph had succeeded in creating another one of his Ralph-knots, only this time right in the middle of the river, making it difficult for him to breathe. After untying him, drying our backpacks and agreeing on selling the horses at the first opportunity, we moved on and found a camping spot as fog was beginning to form. Only it wasn’t fog but smoke, which caused Jon’s asthmatic lungs to have quite a traumatic time. There wasn’t much to do about it and by sunrise the smoke was almost gone.

The following day was quite successful, we advanced nicely and found a good spot to camp for the night. The locals here came out of their gers to check out our tent, sleeping bags, stove, foodstuffs and generally these incredibly tall and weird-looking strangers. Knut Erik had some trouble coping with the camels nearby. In his big empty head they probably appeared to be huge stallions with severe back problems.

On the fifth day we decided to have our backpacks on so we could gallop with the horses. Previously we had been hindered by Ralph coming up with several ways of doing something stupid with his packsaddle. Jon fell off Knut Erik only once, leaving us to spend 20 disillusioned minutes trying to catch the horse. It all went relatively well, until something went off in Ralph’s head, causing him to tear loose of Jon’s grip and take off into the steppe. The tent, saddle and sleeping bags flew off his back, although Jon’s sleeping back - which is kind of borrowed from a friend's girlfriend - got stuck to his back hooves and was dragged along for about a kilometer. We soon lost sight of the horse, but as always, a local happened to come by, caught the horse and fixed the saddle. To his and the other spectators’ great amusement, we continued on our way walking, pulling the horses behind us. For the remaining 45 kilometers to Lake Khövsgöl, we continued like that, dragging the horses for two days. Jon walked behind with Knut Erik and revealed his sadistic side in the inventive ways he tried to make Ralph and Ulrik walk.

As we woke up on the morning of the day we were to sell the horses, we decided against continuing our trek without the horses. The main reason behind this decision was the fact that we were in our sleeping bags, with all our clothes on in our tiny, miniscule tent and were still freezing our asses off. The Mongolian winter had arrived.

So we sold the horses (no hard feelings) for 110 000 tögrög, hitched back to Moron on the back of a lorry for four hours (dusty, but fun) and got directly into a brand-new 10-seater, which this time had only 14 people in it (and a lady screaming on the loudspeakers all night), straight to Ulan Bataar.

Now we are clean. Jon has bought a new pocketknife and we have train tickets to the Chinese border. In many ways, it was fabulous: the nature, the solitude, the people, having our own horses. But neither of us will ever be able to see a horse and not twitch a little, or a steppe without picturing Ralph galloping across it with the damn sleeping bag around his legs. We’re on our way south.

Back to the main Kekkuli page